Presentation in PDF describing the aims, design and methods of the entire Science Alerting system (from December 2009, not completely up-to-date).

Poster on Gaia Alerts presented at the IAU Symposium #285 in Oxford in September 2011.

Poster on Gaia Alerts presented at the IAU Symposium #298 in Chine in May 2013.

Presentation of Gaia and Gaia Alerts with Prezi.

Around Gaia (Alerts) in 30 questions on Prezi

Detection will be conducted in almost entire range of available magnitudes from Gaia. Limiting magnitude for Gaia is equivalent of V=20mag, but for detection we will require signal above at least 19mag, to avoid spurious anomalies at high noise level. The saturation limit for Gaia is around 5 mag. 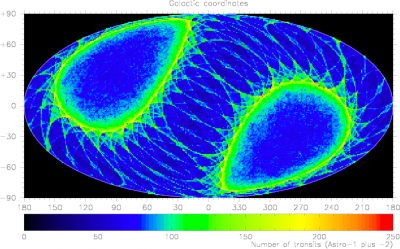 Number of observations per source over entire mission.

Detections will be strongly affected by sampling properties of the Gaia. These are induced by characteristic "scanning law" (see figure). Gaia will be equipped with 2 telescopes, therefore there will usually be two subsequent observations of an object, separated by 106 minutes. Next scan comes after 6h after the first (4.5h after the last observation), so there may be another set of two fields of view observations, unless the satellite precesses enough to move to another bit of the sky. Then, the same object may be observed after 40-70 days, depending on the location.

Such cadence allows for detection and immediate confirmation of an anomaly using closely spaced observations, but after the sequence, the object is gone for a long time from Gaia's view. 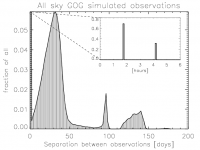 Sampling distribution over the whole sky from Gaia simulator

On the Gaia focal plane there are 8 or 9 (depending on alignment of the source on the plane) separate CCDs. The source will be observed by each of them with 4.4 seconds integration time. This feature can be very helpful in rejecting spurious anomalies, like cosmic rays, etc. Also, it will provide closely spaced observations, useful in detecting very rapid changes in brightness.

Here you can download a movie (40MB) showing Gaia scanning law (in galactic coordinates) and how number of observations per star is growing over the entire sky. 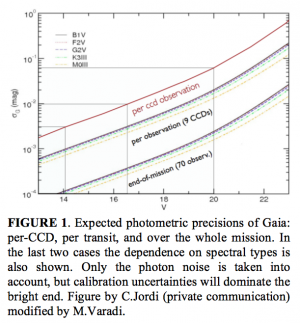 At this stage all additional information from Gaia and later from other catalogues will be used for narrowing down the sample of interesting alerts.